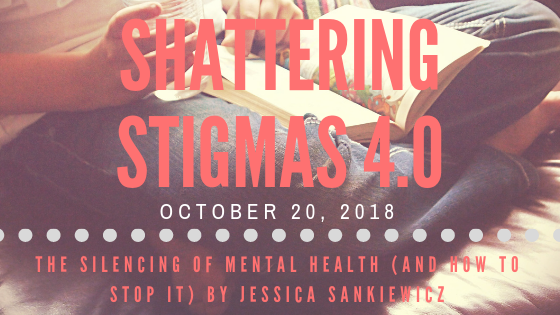 My dear friend (and YA/NA writer and poet) Jessica Sankiewicz (some of you may know her by her romance-writing alias Lilly Avalon) wrote an amazing post that, as soon as I read it, I knew I wanted to close out the event with. This post sums up why an event like Shattering Stigmas exists and why I will continue to kick and scream about mental health awareness. Thank you for writing this. You can find Jessica on Twitter and on her blog.
Something I’ve been thinking a lot about these days is mental health. Not just my own mental health, but also people I personally know and even the ones I don’t. When you struggle with a mental illness, you can usually empathize with someone else who has one, or at least to some degree sympathize. And when you discover someone else who has experienced the same feelings and emotion as you have, you feel less alone.
Although a large percentage of people have a mental illness, there is still a huge gap between those who understand it and those who don’t. This gap has created a divide, and this divide has caused a fear of open discussion. While I’m more than willing to discuss mental health with certain people I trust, and to openly talk about my anxiety and depression online, I’ve been feeling that fear anytime it is brought up elsewhere.
Since I want to help others understand mental health better, I tend not to shy away from bringing it up when a discussion occurs. When I do speak up, however, there’s a moment with my words hanging in the air where one of two things happens. Either the person fully comprehends what I’m saying, or the person immediately puts their guard up. If it’s the former, everything is fine because we’re on the same wavelength. But if it’s the latter? They will then choose to steer the conversation elsewhere or simply stare.
That moment where I’m hoping for a mutual understanding and the other person doesn’t get it or refuses to? It’s painful. It makes me continue to talk, to attempt to make my point, to achieve some sort of positive reaction out of them… or it makes me shut up and wish I had never spoken in the first place.
That look, as though they are uncomfortable with my honesty, and possibly now uncomfortable with me? It hurts. It feels as though a relationship has changed entirely based on one single conversation.
And it makes me question why I even bother.
Here’s the deal, though… I have to stop myself from the negative thoughts. Does it bother me when I receive that bad reaction? You better believe it does. But if I choose to stop talking, I’m not helping erase the stigma surrounding mental illness. Even though I’m going to come across people who squirm, I can’t let their reaction cause me to close up. I spent years bottling up my emotions, not being able to make sense of them. There’s no reason for me to return to a place where I’m unable to be honest about my feelings.
So I would like you to know that if you’re fearful of speaking up, too, you’re not the only one. I’d also like you to know that you’re strong enough to speak up. Sure, we’re both going to face challenges when it comes to discussing mental health with those who refuse to truly listen. But we will find those who need to talk, who are grateful for us being brave enough to. That’s why I will never be silenced again.
Thank you so much, Jessica! And thank you to EVERYONE who has supported, written and boosted Shattering Stigmas these past two weeks. I’m grateful for all of you.

Enter our *international* giveaway for a mental health read of your choice!