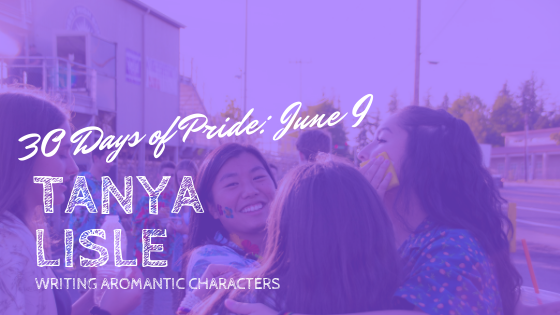 Except when you do that, is that just a character without a romantic subplot? That might be nothing.

So you add in how the character doesn’t care about relationships! They have long inner monologues about how they don’t know what the big deal is with love. They bring it up apropos of nothing, explaining their romantic orientation to people with only the weakest of promptings. Love is not for them! No siree! Never!

Except we’ve seen that story before. And in the end of those stories, the just hadn’t met the right person before.

It also doesn’t ring entirely true. Sure, some aro people will be very invested in being anti-relationship and anti-love but, amongst me and my other aro friends, that’s not so much the case. So the question becomes how do you do it?

Don’t have them find love in the end

I feel like this should be obvious, but surprisingly it’s not. An aromatic character is not going to fall in love in the end of the story. If they do fall in love, that’s fine! Falling in love is very nice! But they aren’t aromantic if they fall in love.

I’m a big fan of this. Just dropping “aromantic” in there makes their actions clear. I personally don’t feel like you have to explain it when you use it and you can let the character’s actions speak for themselves after using it, but using the word to make it clear helps a lot to create that distinction between a character who is not interested in romance and a character that does not have a romantic subplot.

There are some aros who absolutely will monologue about the lack of necessity of love. Especially those who are just figuring themselves out. But for the most part, romance and love just… don’t come up. Everyone around us are in love and that’s great for them, but we tried to fall in love before and we know it’s not for us. Every time a relationship appears in front of them does not mean they immediately think about their aromanticism.

Really, it just doesn’t come up that much unless you’re directly asked. At all. And most people don’t ask about it. It’s not an all encompassing thing that just pops up without some sort of inciting incident.

They don’t have to hate love

They really don’t! Just because it’s not their experience doesn’t mean that they hate it. It is very prevalent and shoved at people from a very young age from every angle, yes. But, like incessant advertising, it becomes background noise after a while. It will depend highly on the character, but having a person be resentful of love as a concept is not common in my experience and usually happens in addition to something else to further elaborate on a different character trait, like hanging onto resentment of people as opposed to the concept of love.

They probably know about love and sex

Not experiencing the feelings doesn’t preclude anyone from the knowledge of what happens in a relationship. It’s likely a much more academic look at what love and sex are like absorbed through anecdotes from friends and the media around them, which is saturated with it. Aros generally know how to crack a dirty joke and follow it up with a no thank you when they are hit on.

Now onto the actual writing stuff! That moment where the character says out loud that they are aromantic is a fantastic time to illustrate their character. There’s two very common reactions that every aro person I know are ready to deal with as soon as they come out. Either they are going to have to explain what that means, or the other person is not going to believe that it’s a thing. Knowing that they are going to have to deal with that every time they say it, you have a great opportunity to show what they are like as a person.

Are they confrontational or looking for a fight? Be blunt! You got a problem with that? I will cut you.

Are they wary, on guard, or in a new situation with people they aren’t comfortable with? A couple test questions to see how the other person will react and a lot of considering about whether or not it’s worth whatever might happen.

Do they not think much of the person they’re talking to? Start out with a definition.

Generally comfortable with everything and feel pretty safe with the world around them? Casual mention and move on with their day.

All this changes with their life stages

I feel it’s usually better to have the aromanticism, like any other sexual or romantic attraction, be part of the character than the defining part of it. But that’s just me! You may do things different! Keep these in mind when it comes to writing and I’m sure you’ll do fine. I hope some of this was helpful. Happy writing, everyone!

One thought on “Writing Aromantic Characters by Tanya Lisle”