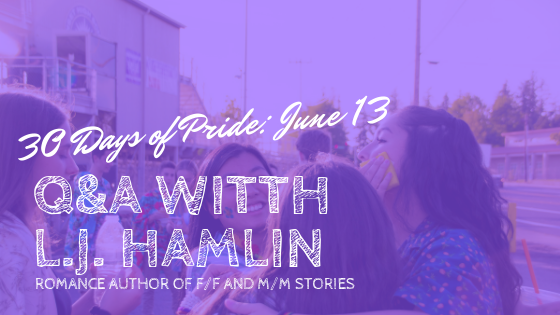 I am so excited to have had the chance to have talked to L.J. Hamlin, a romance author and lovely person for this event. She publishes with Less Than Three press, Nine Star press and JMS books. You can visit her on Twitter or on her website.

Taylor Tracy: 30 Days of Pride is all about creating a sense of queer community during Pride Month by giving writers, bloggers, etc. a platform to share their voices and identities. Can you talk a bit about what queer identity means to you and what pride means to you?

L.J. Hamlin: My queer identity is a big part of me and my daily life through the community it has brought me. From before coming out to now with each identity and label becoming solid in my mind I have found more people like me going through the same things, at large they’ve been welcoming and help me feel proud of myself and the differences I was told were wrong by things like the media, the books and TV and even music I grew up with.

Pride means no longer being afraid to tell the world and especially the people I love who I am and how I feel. I won’t lie and say the fear is always absent with new people and new situations, but the shame I once felt is gone now. I feel pride in who I am and those around me.

L.J.: The identity I first came to was bisexual, that one took a long time, I was in denial and a late bloomer. I convinced myself because I was attracted to cis men I couldn’t be queer, but then I met more bisexual people in het seeming relationships and it clicked that I didn’t need to fit a stereotype to be bisexual. Demiace and demiaro came after that. I was neverly over enthused with dating or romance, strange for a romance writer I know, I usually preferred reading fictional dates to going on them and from reading articles online and books with characters with those identities it again clicked into place, another piece of the puzzle that had been missing or more hidden.

Taylor: You write f/f and m/m stories with various indie publishers and outlets. Can you talk about your experience working with these various places, some of the perks and challenges and your hopes for publishing your work in the future?

L.J.: I love all of my publishers, I can’t rave about them enough, the three I’m with now have treated me so well from the first query letter to now years later with a long list of books. The perks included getting to work with great editors who work with me to polish my work and amazing cover artists, things I could probably never afford at that level. The challenges can be finding the right publisher to put your trust in, my first publisher, I won’t name them, but they closed owing me a years worth of royalties at least, and owing a lot of people a lot more. My hopes for the future are to both publish more with the publishers I’m with but to also branch out and reach bigger publishers to get my books into the hands of more queer people, especially queer disabled and mentally ill people.

Taylor: Building on my last question, how has your writing of identities under the LGBTQPIA+ umbrella evolved over time?

L.J.: Before I was out as bisexual to my family I was too afraid to publish any F/F works in fear they would finally guess my secret and I’d be outed. And as well as some characters just feeling male when they come to me, having male characters offered me a distance when writing personal rep and made it harder for people to know things I wrote were largely own voices. So I write more identities now, I’ve also gotten older and so have most of my characters, some of them are a little bit more cynical and wide eyed and I think that definitely comes from my own life experience.

Taylor: June is supposed to be Pride Month, but there’s often a lot of petty and crappy behavior, even within the queer community, during a month that stands for community and pride. What do you wish people would do better during Pride Month, on and offline?

L.J.: Stop policing who belongs, ace and aro people get crap, Bisexual and pansexual people get crap, trans people get crap. The pride events largely aim themselves to allo cishet gay men, most usually white ones. So I think the marketing needs to change to be more inclusive and people will follow suit. People need to not fight about who is the most oppressed and who has the hardest time being queer, and in some cases who can even identify as queer. Pride was started by a trans woman of colour and it was more than just a reason to get drunk wearing glitter and as fun as that can be people need to remember the reason behind it, that it started as a riot when we all had no rights at all.

We all need to practice what we preach, the acceptance we want from allo cishet people we need to give to each other.

L.J.: Being queer and disabled can be tricky, especially pre fifties as there is an obsession with health and looks, not being in perfect physical condition is often looked down on in the queer community and there is still a lot of ableism to face. I will see tweets asking for acceptance and calling out hate to the queer community that use slurs against disabled people.

Disability is also largely forgotten about by many queer activists as if they don’t realize queer disabled people exist. They’ll list who should be helped and we’re not there, they won’t yell about ableism, most don’t even know that we don’t truly have marriage equality yet as many disabled people can not marry their partners without losing vital benefits from the government, money used for medical expenses and basic needs.

So it makes me angry, but a few years ago I decided a way to use that anger instead of just yelling into the void was to start writing disabled characters getting their happily ever afters without going through some magical cure or changing core parts of themselves. I wanted to show that disabled people are still desirable, many of us are still sexually beings and we certainly can be loved, and our partners are not saints to be given pity and pats on the back.

Taylor: What are some of your favorite queer book recommendations?

L.J.: Megan Derr- Tournament of losers is excellent, another favourite is Austin Chant-Peter Darling. More recently I’ve been loving Unbroken by Brooklyn Ray and Off the Ice by piper vaugn & Avon Gale

Taylor: What other pieces of media (so movies, TV, theater, music, etc.) have been fundamental to your experience as a queer person or are your favorite examples of queer representation?

L.J.: It’s old and outdated but the first time I really saw queer people was in the drama “Queer as folk” I’d never seen so many queer people being friends, working different jobs and having different lives, so it made an impact. A show I’m excited about and think everyone should watch from what I’ve seen is “Special” on Netflix which is about a disabled queer man that is actually written and acted by a disabled queer man.

My favourite queer piece of music is girls/girls/boys by Panic! at the Disco who’s lead singer Brendon Urie has confirmed he is pansexual. I think it’s nice for people to see a man like him, married to a cis woman and realize that yes he can still be queer and come out. Also the song is just a bop and the video is really sexy, especially the director’s cut.

Taylor: If you could give advice or a message to the LGBTQPIA+ identifying folks who maybe don’t have a sense of community, feel alone, aren’t out, etc. this month, what would you say?

L.J.: You’ll find your people eventually, it might not be easy or a smooth road, but keep looking. Anyone who doesn’t accept you as you are and tries to change you is a arsehole and you shouldn’t listen to them. Of course I’m not saying go around being inconsiderate to others, but at the end of the day you’re the one who has to live with you, to look at your face in the mirror and go to bed with your brain talking, so make sure you’re making choices that make you a person that you like before worrying if other people will like you.

You don’t need to love yourself to be loved by others, but it can feel good to work toward self like and love and you often realize during it that you deserve better than what you have.

Love is love, as long as everyone is capable of consent it is a good thing to be shared.