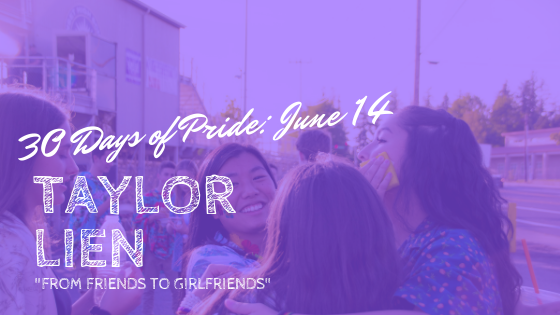 I am so blessed and excited to present for you all today…a love story. I’m beyond happy to welcome my name-twin, my fellow Newsroom stan and my dear friend Taylor Lien to the blog today to talk about how she and her girlfriends moved from friends to girlfriends. Taylor is a culture nerd. You can find her on her blog.

In this beautiful year of twenty-bi-teen I have started dating a woman. In January, I had said that before the year was over, I wanted to kiss a woman. As someone who had at this point, almost entirely embraced her identity as demisexual and biromantic, or bisexual to many of my friends, this was something I felt I needed to do. As it turned out, I got a whole lot more than I ever expected, and more than something better than I ever could have asked for.

I have known my girlfriend for three years. We met on our second day of our freshman year in a class that was a fresh Hell. We technically had a class together our first today, but didn’t figure that out until later. Fast forward three years and we’re having a conversation about our first impressions of one another. I unsurprisingly came across as outspoken and a little argumentative. She seemed to be so interesting; her mention of an interest in comedy piqued my interest. Basically I fell head over heels the first day I met her, and I remind her all of the time how she had me pining for two and a half years before I even knew she wasn’t straight.

Early on in college, I wore my bisexuality on my sleeve, online at least. Since she followed me on Twitter, it meant there was no coming out conversation necessary. It also meant that I could gush about how much I was in LOVE with Lily James as Young Donna in Mamma Mia 2, or Emily Mortimer in The Newsroom. In my real life, for quite a while, she was the safe space where my queer identity resided.

In March of this year, after numerous conversations about the utter attractiveness of women, she came out to me as bisexual. The conversation was momentous, but I just shared my joy at this thing we shared and we probably went on to talk about how in love with Barrett Wilbert Weed’s voice we both are. Something had shifted, and the friendship which had steadily grown closer over the span of those two and a half years started to occupy a different space in my head and in my heart.

Subconsciously, I was desperately in love this point, and thankfully no longer pining after a girl I believed to be straight. Over the next month, we had approximately five years of friendship smashed into several weeks. An eventful school trip to Vegas, some tispy Moulin Rouge viewings, and nearly all our free time spent together brought us together like the better halves we are for each other.

Now looking back, there was no doubt, I was in love with her. We had great chemistry and our banter was unmatched. The weird sexual tension of the will they-won’t they dynamic we had going probably made us unbearable to be around, but since the only people we wanted to see were each other that wasn’t a big problem.

The night we kissed was one of the best of my life, and will forever be cemented as a highlight. That night we watched two of my favorite episodes of Parks and Recreation, “Flu Season” season 3 episode 2 and Ben and Leslie, or their wedding episode from season 5. These episodes never fail to make me emotional, and I turned to her while we were cuddling and I said, “The best television writers know when to make the couple kiss. You can’t drag the sexual tension out too long.”

Then I whispered, “Can we do this?”

She nodded yes enthusiastically. THEN DEAR READER WE KISSED. That moment was culminated three years of my journey with my sexuality and recovery from bad relationships, and I was here with a woman who I loved and who loved me dearly.

That was just a month ago, but I’m pretty sure that I’ve met the love of my life. To my love, I’m glad that you FINALLY stopped being adorably clueless long enough to realize that I wanted to kiss you for more than science. I am also very grateful that my unsubtle hints of, “Do people think we’re dating?” when going out in public finally went answered. The last few months have been a dream come true, and I couldn’t imagine living with anyone else but you…since yes dear reader, THEY WERE ROOMMATES. I could not be more proud to be celebrating pride as a bisexual woman in my first queer relationship. I have been so incredibly blessed by twenty-bi-teen that I can’t wait to see what the second half of the year holds.