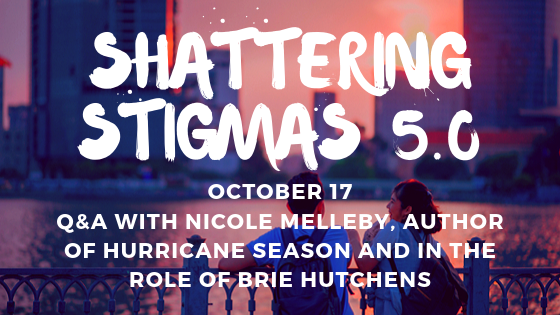 Vincent van Gogh plays a major role in Hurricane Season. He serves as a lens through which Fig copes with her Dad’s illness and her role in relation to it. How did van Gogh and his life come to be a part of this story and did any research you did on his life surprise you?

Note: These were originally two separate questions that Nicole answered together. 🙂

Nicole Melleby: In spring 2017, my cousin Andrew was studying abroad in London. My aunt and uncle were planning a vacation for themselves and Andrew’s two younger sisters to go out for a week to see him. I pretty much decided I was going to crash the trip, and they, being the best, didn’t complain about it.

At the time, I was coming out of a low period emotionally, and hadn’t really been writing anything much; it was too hard to be creative when I was feeling the way I was. But I was finally ready to try something new. I knew I wanted to explore the relationship between a father and daughter…but that was pretty much all I had. I didn’t really expect to work on the idea at all while on vacation, but I adjusted to the jet lag pretty quickly, while my family decidedly did not. So, I had my mornings to myself and I knew that the National Gallery in London was free—and I do love a free museum—so I decided to check it out.

When I got to the Van Gogh paintings, there was a tour guide talking about Van Gogh’s mental illness, and there was just…something so unbelievable relatable about what he was saying—particularly since, like I said, I was just coming out of my own depression—and I ended up going to the gift shop and buying a book of Van Gogh’s letters. At the time, the only thing I knew about Van Gogh was that he cut off his ear—so the surprising part was learning how much I felt connected to him and his thoughts and his mental illness the more I read about him, the more I wanted to understand him.

I read all of his letters on the plane ride home, and I knew exactly what I wanted to write by the time we landed.

As far as Fig’s sexuality—I always knew I wanted to write queer stories, so I didn’t really give it much thought at first. I’m a queer woman, and I know how much these sort of coming of age stories would have meant to me when I was younger.

The one thing I hope kids get out of this book, the one thing I wanted to accomplish, was that they know they aren’t alone, that they’re seen, that I see them.

Taylor: Hurricane Season and your upcoming 2020 middle grade, In the Role of Brie Hutchens…, deal with the emotional struggle of discovering one’s identity and beginning to share that with the people in one’s life. Can you discuss a bit about what brings you to write about the emotional journeys of queer girls in middle grade and how writing Brie’s story was different from writing Fig’s?

Nicole: Like I said, as a queer individual, it’s important for me to tell stories that I would have needed. That’s pretty much the question that every queer kidlit author is asked: Do you write the stories you needed? Of course I do! But also the answer is a little more complicated than that. The middle grade readers of now are different than when I was a middle grader—what they needed is different than what I needed, or wanted. So I try and think about what it would be like to be queer in today’s world, and mix that with the stories I wish I had when I was younger, and then just tell the most honest story I can about that journey.

The biggest difference between writing Fig’s story and writing Brie’s, is that Brie’s sexuality plays a huge role in IN THE ROLE OF BRIE HUTCHENS…, it’s basically the leading storyline. Every obstacle that Brie faces stems from her awkward first crush on a girl, and her desperation to connect with her religious mom, in the face of her sexuality and what that means for her moving forward. Fig’s sexuality wasn’t what the story was shaped around, it was just a part of who Fig was. Both books also have coming out scenes—but Fig’s is short, and simple, and easy (which was something I wanted to write more than anything) and Brie’s is much more complicated, and happens over, and over, and over again. Fig’s dad accepts her (he’s even learning about his own sexuality in the meanwhile) while Brie’s family needs a little more work.

Taylor: I have to say, from someone who was a huge space nerd and Hayden Planetarium geek as a kid, I am SO excited for your 2021 release How to Become a Planet. Can you tell us anything about that book and what you’re trying to do with the mental health representation in it?

Nicole: I keep referring to this book as my inverse HURRICANE SEASON. The story starts off with an 11-year-old girl named Pluto having just gotten a depression and anxiety diagnosis. While HURRICANE SEASON dealt with Fig and her dad struggling with his undiagnosed bipolar disorder for most of the book, Pluto and her mom are struggling to understand and deal with Pluto’s diagnosis and what that means for Pluto moving forward.

My friend Josh Levy (who wrote a wonderful sci-fi MG book called SEVENTH GRADE VS. THE GALAXY) actually told me that he called the Hayden Planetarium Question and Answer Hotline to ask them questions about traveling in space while writing his book, which takes place on a public school that is a spaceship. When he told me this, I had already written a first draft of Pluto’s story—and her mom’s love of outer space and how she gave that love to Pluto—and I knew immediately I wanted to write that into my story. So Pluto, while wondering why astronauts decided that Pluto (the dwarf planet) wasn’t a planet anymore, and wondering why she has depression and why her life is changing because of it, calls up the Hotline to ask all of the big questions that are on her mind. Even if they can’t exactly help her.

Taylor: What are some of your recommendations for great mental health representation, whether it’s in books, movies, TV, etc.?

Nicole: Here are some of my favorite Middle Grade books that feature characters with mental illness:

Taylor: Are there any mental health issues you wish were more widely represented in middle grade and YA, or issues you hope to write about but haven’t had the chance yet?

Nicole: Just like I said about how there isn’t one story fits all for sexuality, the same goes for mental illness. I would love more of the issues already written about, I would love ones that haven’t been written yet. Just like in LGBTQ MG—there isn’t as many stories about POC with mental illness, so I’d like a wider variety of children’s stories being told, too. I’m hoping to be able to continue to explore different stories about middle grade characters with different sexualities and mental illnesses moving forward, too.

Taylor: Do you have any self-care tips, tricks or secrets you’d like to share, especially for writers?

Nicole: You don’t have to write every day—I see so many writers wracked with guilt over how much or how little they write day-to-day, and it’s hard! Write how much you want to write, how much you need to write. You decide what those answers are.

Find a group of writers who are in the same boat as you. If you’re looking for an agent? Find writers to commiserate with. If you’re on sub? Ditto. Find a debut group if you’re having a very first book coming out—because all of these stages are daunting and new and no one knows how to navigate them, but it helps not navigating them alone.

Also: If you’re facing a rejection? I find it best to sing this ridiculous song, because it’s so ridiculous it makes me feel better every single time I have sung it to myself (which has been often, because rejection is part of being a writer!): Nobody loves me, everybody hates me, I should just go eat worms. Worms! Worms! Worms!

Nicole Melleby is a born-and-bred Jersey girl with a passion for storytelling. She studied creative writing at Fairleigh Dickinson University and currently teaches creative writing and literature courses with a handful of local universities. Her debut novel, HURRICANE SEASON earned three starred reviews and was awarded the Skipping Stones Honor Award for exceptional contribution to multicultural and ecological awareness in children’s literature. Her second novel, IN THE ROLE OF BRIE HUTCHENS… will be released Spring 2020. When she’s not writing, Nicole can be found browsing the shelves at her local comic shop or watching soap operas with a cup of tea..

One thought on “Q&A with Nicole Melleby, Author of “Hurricane Season” and “In the Role of Brie Hutchens…””