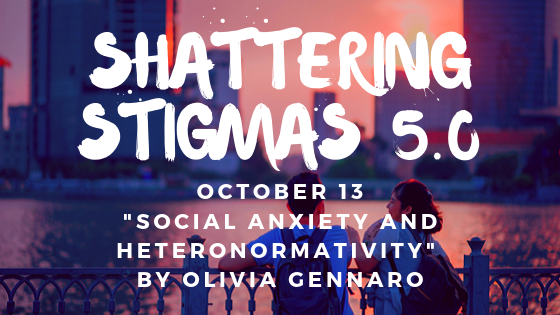 I know I shouldn’t play favorites with my Shattering Stigmas posters because they are all wonderful and I am so grateful for each and every one of you and my fabulous co-hosts Amber, Shannon and Mari. However, there is something special about having such a close friends share extremely personal things with me and on my blog. Olivia originally wrote this piece for last year’s Shattering Stigmas and it got lost in the shuffle. However, I’m more excited to post it this year because over the past year, Olivia has become such an incredibly close friend of mine, so thank you my favorite (and only) accountabilabuddy and podcast co-host. Speaking of our podcast, Culture Popped Open, you can find us on Twitter and Instagram, and you can listen to us wherever you get your podcasts. Olivia is a future English teacher (she’s gonna be goals, y’all) and you can find her bookish and educational musings on Twitter, Instagram and her blog. Take it away, friend. ❤

I have social anxiety. I can say that now because my licensed therapist agrees. I also didn’t figure it out until this year, and I didn’t even realize I had anxiety until four years ago, even though it all makes sense I’ve had this all along. Oh, and then there’s also how my therapists have said I probably have some sort of OCD, and I obsessively check my hair and pick the skin on my fingers and typo-check and over-explain things, revise, and explain again. There, that’s it. Over-explain things. Like I am right now. Let’s move on.

I’m also bisexual. I feel very sure of that and I’ve properly known for like three years, even though of course I’ve always known a little all along. I also like the word queer, but that one’s more difficult to explain to those outside the community. I sort of like pansexual, but how can I confidently say I’m attracted to all genders? Oh, look. There I go again. You get it.

These two things interact in a way that goes beyond that paragraph. For me, my social anxiety means that I take great pains to present myself how I see myself, so that others can see myself that way. Hence the constant explaining. (This means I’m confident in school, because I’ve always been told I’m good at it, and you can see how my perfectionism ended up very unhealthy.) This obviously gets complicated when it comes to bisexuality. Unless I’m wearing a big bi flag button (which, admittedly, I do have on my backpack), no one’s first guess is going to be bisexual. It’s not anyone’s first guess. Most people are going to assume I’m straight, because the world is rather heteronormative. Others might think I’m gay now that I’ve got shorter hair and sometimes I’ll dress more masculine (I like to switch it up). Or they might assume one or the other depending on the gender (or assumed gender) of the person I’m dating. And then I can’t just broadcast this fact to everyone, either, because homophobia and biphobia exist, and my social anxiety really just wants people to like me because that’s how I feel in control of my image. Being “political” or “controversial” by nature doesn’t go well with that.

And then bisexuality comes with even more explaining, because a lot of people don’t understand it. When did you know? How do you know? When did you come out? Are you 50/50? Have you been with each? Wait, there’s more than two genders? Then why do you say you’re bisexual? But if you’re in a relationship with [gender], are you still bi? How does that work??

So, naturally, every time I tell someone I’m bi, I have to resist the urge to explain exactly what I mean by that and my entire history of crushes on various genders. (Thankfully, a lot of my friends at college are totally used to bi people, if they aren’t LGBTQ themselves.) But this world is aggressively heteronormative, which I learned I really, really hate.

This is the story of how I learned that.

I’m going to curb my compulsion to explain everything when I set the scene here, so: Senior prom. Small school; we all knew each other. My boyfriend of 2.5 years broke up with me a few months earlier, and we’d tried to stay “friends.” (We actually had different definitions of what friends were, at least good ones, so after graduation we stopped speaking.) We were in the same friend group, which was more or less the half of the grade because again, small school. As you’d imagine, with my social anxiety that I hadn’t figured out yet, I was terrified of being that girl (dumped, upset, vengeful, so on), in addition to all the academic pressures. I knew I was bi, but I was only out to my ex at the time. (He was totally fine with it. But that’s another story.)

In this new stage of my life, where I was single and college-bound and just looking forward to all the independence that comes with that, I figured we would hang out with our mutual friends together. There were other girls I knew who were recently single and it seemed like a fun idea. After all, he’d broken up with me to be single and focus on himself, right?

But then I asked him if that’s what he was thinking of too, and he revealed he’d already had a probable date, one of those recently single friends, so there went my plan. Putting aside all the personal feelings that necessarily came up here, he said something that bothered me: “It’s important to me and my family.”

I didn’t understand this, and honestly, I’d never understood all the conventions about buying tickets or paying for dinner. (Not to mention that we’d had a junior prom, of course, and took many pictures.) We’d always make a joke of it. I said it was because it was important to me that I felt equal in our relationship, which is why all the college and career stuff caused me to panic a lot and ended our relationship. But now I understand it was about way more than that—it was my queerness.

I had this complete existential crisis during the actual dance. Most of our friends had dates, mostly not romantic ones, and I just didn’t understand why it was so important. (Of course, all the pictures taken to be posted to social media also stressed me out, because of my obsession with getting my hair to look right and the digital trail of information.) Sure, I had an argument with my ex over I don’t remember what and cried, but I spent a lot of time sitting in the bathroom, just thinking about why none of this felt right and other senior year feelings.

Part of that was my sexuality, even if I didn’t quite put my finger on that at the time. I wanted—needed—to be seen as me, and I’m bisexual. And that fact will never go away no matter what relationship I’m in.

Social anxiety can be illogical, exhausting, and time-consuming, but it does force me to examine who I am. And while I struggle daily against the heteronormativity that means most people don’t see me as I truly am, there are benefits from this self-scrutiny. Labels like “bisexuality” and “social anxiety” help me understand how I operate, eliminating all the fear and confusion that dominated my teen years.

2 thoughts on “Social Anxiety and Heteronormativity by Olivia Gennaro”