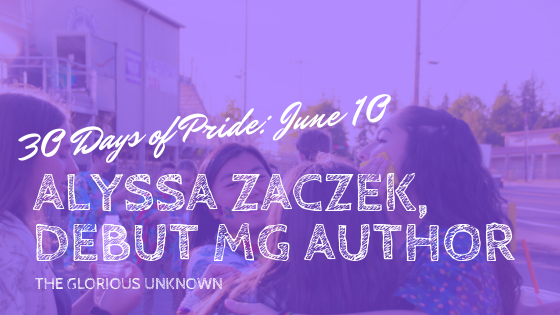 I’m so happy to welcome Alyssa Zaczek to the blog today. I had the pleasure of meeting Alyssa in person at BEA this year and I am so delighted to have her hear to talk about finding yourself, questioning your identity and her debut middle grade novel, Martin McLean, Middle School Queen, out on January 7. You can find Alyssa on Twitter and at her website.

When I started writing my debut middle grade novel MARTIN MCLEAN, MIDDLE SCHOOL QUEEN, I was adamant that it should not be a “coming out” book. Martin is a 12-year-old boy. Lots of 12-year-olds have known for years that they’re queer, but Martin isn’t one of them. He’s not sure who he is, or what he likes. He’s only just begun to explore crushes and butterflies in his stomach. And by the end of the book, he’s still not sure — and that’s okay.

Here’s the secret: You know the people who have always known they were queer? Those people you maybe (read: I, definitely,) thought were “better queers” or “real queers” than you because they’re so assured in their identities? Even they still learn things about themselves, still find new and beautiful things about their queerness, and about themselves as humans. There’s no such thing as “better” or “real” when it comes to identity and sexuality; we’re all just at different intersections on the same road.

I had to learn this firsthand, and it wasn’t easy, as I am not a person who is uncomfortable with the unknown. I live with anxiety and a panic disorder, so fear of the unknown is part of my day-to-day in a way that it may not be for others. I am intimately familiar with that fear; I know it the way you might know the layout of your childhood home. So when I began to realize, in my late teens and early twenties, that maaaaybe I wasn’t straight, I found myself staring into the unknown.

And the unknown stared back. It was stubborn, just like me. It wasn’t going anywhere, no matter how I tried to ignore it or outrun it.

Okay, fine, then, I grumbled. I decided to tangle with the unknown in a way I hadn’t before: gently, and with intention. If I wasn’t straight, what was I? What would that mean? What would that look like?

Hell if I knew. I had few openly queer people in my life, even fewer who were women and bisexual, the identity I would eventually claim as my own. I didn’t even know bisexual was an option until well into my college years. How would I even begin to express what I was feeling when I could barely name it?

And then, once I had named it, I became acutely aware of the queer gatekeeping happening around me. Was I a “real” queer person, even if I had never been with a woman? I knew people  — friends, even  — who would say no. The derision I saw for people like me, people who didn’t “always know” they were queer, confused me, saddened me, angered me.

So I stopped trying to meet expectations of what a queer person “should” be like, and started trying to simply live my truth. That, for me, looked like a quiet, deeply personal exploration of who I am. It happened in fits and starts. There were bumps in the road, and it’s a road that, as far as I can tell, has no end.

I never felt as though I had to come out in any official fashion, because my queerness simply felt like part of me, inextricable from the rest of my personality and the way I lived my life. The way I see it, my own understanding of my sexuality does not and should not bisect my life or the lives of the people I love into a “before” and “after.” It is my story, constantly and presently unfolding. I don’t owe it to anyone to issue a press release.

(To be clear, I love and support your personal decision, whatever it is. Come out, don’t come out, it doesn’t matter to me, as long as you are doing your best to love yourself. I see you — no matter what.)

I did try to come out to someone I love, once. There was a rainbow in the sky that afternoon. Some day I’ll tell the story of what happened after, but not today. Despite how painful that experience was, it did help me to realize that I am called to let young people know that they don’t have to know who they are right away. They don’t have to label themselves or announce their sexuality if they don’t want to, or aren’t quite sure yet. Finding yourself — whatever that means for you — is an incredibly personal journey, and there’s no wrong way to do it.

Throughout your life, lots of people will try to tell you who you are, but I think there’s no time that’s more true than when you are young. In middle school, high school and even college, you’re in the very beginning stages of learning who you are. It’s a vulnerable, formative time, and if enough people swoop in exactly then and tell you who you are —who they think you are —you just might start to believe them.

But I would implore you to listen to no one but yourself. You might not have all the answers today, or tomorrow, or years from now. But you will, some day, if finding the answers is important to you.

And if and when you do name the thing you’re feeling deep down inside you, don’t fret: There’s plenty more unknown where that came from. Not all of it will be fun, or feel good, but all of it will help you grow.

If you can — however tentatively, however fearfully — tiptoe towards becoming comfortable living in your own unknown (and you can, I know you can,) there are wonders to behold there.

Martin McLean doesn’t come out, because he’s already out there living his truth the best he can — and the truth is that he doesn’t know exactly what he feels just yet. Maybe one day he realizes his truth actually looks a little different, or answers to a different name, but it’s still his truth. And it’s still valid, as is his choice to tell that story (or not tell that story) however he sees fit. He’s living and learning in the glorious unknown, in the magnificent maybe, and regardless of what he ultimately identifies as, he’ll have gotten to know himself better in that misty grey space.

It’s a joy I hope each and every one of you get to experience, regardless of how you identify. And you can — all it takes is that first small, probing step. Close your eyes. Square your shoulders. Take a deeeeeep breath. Decide, once and for all, to get comfortable with being uncomfortable, and put one foot in front of the other.

I’ll see you out there.

One thought on “The Glorious Unknown by Alyssa Zaczek, Author of “Martin McLean, Middle School Queen””